The earliest mentions of snowmen date from the sixteenth century (Shakespeare also mentions them). The popular character also appears in a compilation of nursery rhymes in 1770, in Leipzig. It was only at the beginning of the twentieth century that the snowman was associated with the end-of-year celebrations. Nowadays, in the Western culture and in the northern hemisphere, however, the snowman is associated with Christmas and winter.

In Lithuania, they call a snowman “a brainless man”. For this reason, Lithuanians had a great way to show their dissatisfaction with their government. Namely, in the winter of 2005, Lithuanians built 141 snowmen in front of their Parliament, one for each of their MPs. In Japan, they put buckets on the heads of snowmen as hats (you can see it in mangas and anime). The Japanese call snowman Yuki Daruma (だ る ま ま – “Daruma of snow”). Daruma is the Japanese name of Bodhidharma, a very important Buddhist monk. 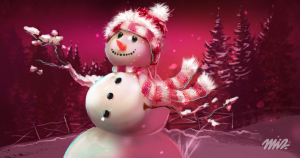 Snowmen also appear as characters in the stories, not only decorations. In Russian paganism, for example, they were spirits of the winter, snow, blizzard – Russians even called January “Snowman” (снеговик). In a fairy tale written by Hans Christian Andersen, a snowman gets too close to the stove and dies trying to get warm. There is also a German tale about a chocolate snowman who wanted to see snow and a boy takes him out on a cold winter day.

A snowman usually consists of two (like in France) or three (like in Germany) balls of snow. The biggest snowman was more than 37 m tall. Citizens of Bethel, Maine, United States, built it in February 2008, and it took them almost a month to do it. They used car tires for buttons, pine trees for arms and skis for eyelashes.

If you liked this post, be sure to check out NORAD Tracks Santa – you’ll love it!